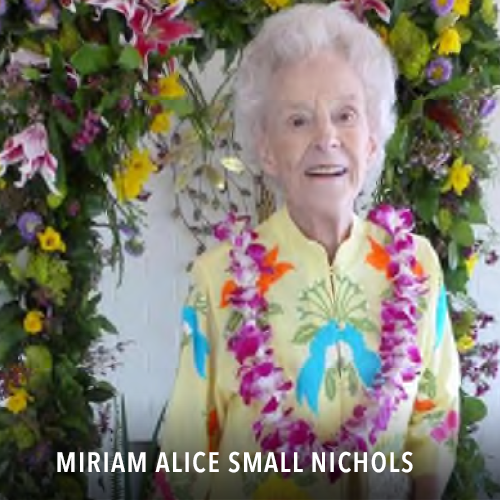 Miriam Alice Small Nichols was married to Emil D. Nichols and had four sons: Paul, Patrick, Philip, and David. They retired to Vista in 1970. Miriam was an avid volunteer and environmentalist her whole life, offering her time and talents to promote environment and community events.
Miriamís primary outlet for volunteer efforts was the General Federation of Woman’s Clubs. She joined the Woman’s Club of Vista in 1972. In 1980 The Woman’s Club, Miriam and David's Boy Scout troop began the first glass curbside recycling service for Vista - also the first curbside recycling program in San Diego County.

“At first we collected newspapers in a big piano box under a tree at the clubhouse,” Miriam shared. When the box was full, she loaded her Volkswagen bus with the papers and took them for recycling. Then the club received a grant from the California Department of Conservation for a truck to use in curbside pickup of newspapers and plastic soda bottles. Miriam created a “Hazardous Household Waste” pamphlet, printed and distributed to over 25,000 residents.

During November 1991 Miriam presented her recycling program to delegates from 70 nations attending the Global Assembly of Women and the Environment: Partners in Life, sponsored by the United Nations Environmental Program. Her presentation was titled: Woman's Club of Vista's Recycling and Hazardous Waste Education Programs.

The Global Assembly of Women and the Environment “Partners in Life” had as its goal to demonstrate women’s capacities in environmental management as they related to global ecological issues, focusing on water, waste, energy and environmentally-friendly systems, products and technologies. The 218 success stories presented at the Assembly—including Miriam's—were selected from all regions of the world.

In October 2008, the CD for $10,000 from The Woman's Club's curbside recycling was cashed and donated to Alta Vista Botanical Gardens to help build the ponds and waterfall project, a beautiful central water feature which is a delightful focus for visitors. Miriam was The Woman's Club's Beautification Chairwoman. Miriam was an avid supporter of the Gardens, and in December 2009 The Woman's Club of Vista was honored with AVBG's first obelisk award for continued support and donations. In 2012 she celebrated her 90th birthday at the Gardens.

Miriam loved the environment and was well-informed in important issues and events around the world. Miriam celebrated Earth Day for years. In 1986 and 1995 Miriam and The Women's Club of Vista planted trees for Arbor Day. In the 1990’s Miriam learned how to propagate oaks from acorns and then worked with students at Olive Elementary to start 700 seedlings. They used tar paper cylinders to allow the acorns to grow strong tap roots, and then planted them at local parks. These efforts were recognized by Keep America Beautiful and the United Nations Environmental Program.

She organized numerous cleanups, historical restoration projects, educational programs for children, and much more. Over four decades, her efforts for local, state, national, and international organizations generated tens of thousands of dollars and hundreds of volunteers.

She served as The Woman's Club of Vista President for two terms 1976-77 and 1992-93. She served as Palomar District President for three years 1981-84 when her President's theme was “Bells Are Ringing: For Volunteers.“ She worked with the District and local clubs to contribute to and celebrate the installation of Mission Bells along the El Camino Real. In 1996 The Woman's Club of Vista installed an El Camino Real Bell at Rancho Guajome Adobe.

In 1999 Miriam made the trip into Baja California for the installation and dedication of the third El Camino Real bell at Mission San Miguel, south of Rosarito. She celebrated the centennial of the Mission Bells at a dedication in Los Angeles in August 2006. The bells were originally paid for and erected by the El Camino Real Association in the early 1900s

"Miriam Alice Small was born April 4, 1922 in Pullman, Washington, attended local schools, and graduated from Washington State University in 1944. After volunteering for a local typing pool, she met her future husband, Emil D. Nichols, an Air Force lieutenant. They married in 1945 in Macon, Georgia, and went on to have four sons: Paul, Patrick, Philip and David. As the wife of an Air Force officer, she moved her family 29 times over the course of his career, including stays in Guam, Hong Kong, Puerto Rico, England, and numerous states in the United States until they retired to Vista in 1970.

Miriam was an avid volunteer her whole life. She created the first curbside recycling program in San Diego County, as well as organizing numerous cleanups, tree plantings, historical restoration projects, educational programs for children, and much more. Over the next four decades, her efforts for local, state, national, and international organizations generated tens of thousands of dollars and hundreds of volunteers.

The United Nations Environmental Program invited her to speak at the Global Assembly of Women and the Environment where she addressed delegates from 70 nations. Her primary outlet for volunteer efforts was the General Federation of Woman’s Clubs. She joined the Vista Woman’s club in 1972. She was the Vista club president for two terms, Palomar District President for three years, and a member of the State board for three years.” Published in The San Diego Union Tribune from July 12 to July 13, 2012.